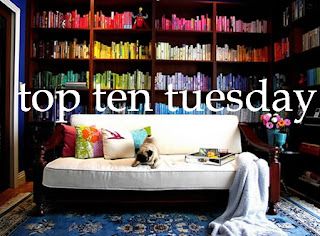 1. I bought into the Twilight thing for a whole week. The movies are a separate monster, and I'm sure I'll find time to harp about that later but, for a whole week, I bought into the Twilight...thing. I did not sleep. In the span of four days (two of which were work days) I read the whole saga. I also read Stephenie Meyer's not-really-published "Midnight Sun" which, I thought, was the best writing out of all of it... yeah. That happened.

2. I went on an Ambrose Bierce kick a few months ago and borrowed this DVD of Ambrose Bierce stories and a paperback collection of his stories from the New York Public Library. Still haven't returned them. They're sitting in my desk drawer at work. I owe some money.

3. In case #2 didn't clue you in, I'm awful at returning library books.

4. Reading annotated versions of books makes me feel totally cool and smart and stuff, so I do it on purpose.

5. Even though I've been told that I must, I have still never read any Tolkien.

6. I shunned Harry Potter when the novels were first coming out. It kind of had to do with the fact that my sister was totally into them and, for those of you who don't know me very well, I don't like to enjoy things that the masses enjoy. I'm kind of a little elitist, and I accept that. But then the first film was coming out and my mother told me that I could not go see the movie with her and my sister unless I read the books. I still stood my ground. Then my mother and my sister went on a cruise a few weeks before the first movie came out. While they were gone, I caved and read all the books that had come out up to that point.

7. I dog ear like crazy. My books, library books, doesn't matter. The only time I don't is if I've borrowed it from a friend and they're picky about that. Otherwise, dog ear dog ear dog ear.

9. I know that everyone says the play of Peter and the Starcatcher(s) is so awesome, but I love the books so much, I've avoided going to see it...I'm worried that it won't be everything I want it to be. And then I'll be sad.