Book thieves, and radical feminists, and lions - oh my!

If there's a moral at the center of this richly embellished New York City™ novel by Fiona Davis, I couldn't tell you what it was. But if you're a bibliophile that's never been to the city that never sleeps, look no further for a novel that will sweet talk you into wanting to splurge on a visit of some of its quieter paths - starting with a visit to the very lions of the novel, now called Patience and Fortitude.

Much like Home Before Dark, Davis' The Lions of Fifth Avenue is two stories in one. The first takes place in 1913, a short time after the dedication of the main branch of the New York Public Library when women still couldn't vote and were barely allowed to have jobs; here, women engage in discourse and activities that are still radical today. The second takes place in 1993 when there were still enough book stores in one part of town to fill an entire afternoon of visits, women held steady jobs but no one batted an eye at casual sexual harassment in the workplace, and the keys to your family's past were not a simple click-and-search away.

Unlike the Sager novel, there's a rather sad thru-line of love that resides at the center of this story - a woeful of example of the way that women have had to, and do, exist and sacrifice in a world of male expectations, and where agency is not granted, but must be taken for oneself. Unfortunately Davis does not really explore that in depth, choosing instead to leave certain freedoms and challenging perspectives in the past and weaving a tale bordering on kitsch.

I love historical fiction, but my patience wears thin when a character visits specific historical sites and events as if saying LOOK THEY WERE HERE SAY HELLO, HISTORY. What should be anchors in the past turn into overt conveniences, and produce National Treasure-level eye-rolls. Sadie (our gal in 1993 whose attire seems to be vintage frump?) hangs out at CBGB in the East Village when she's feeling blue about her life and her job at the library because of course she does. Her grandmother Laura (whose story of eighty years prior plays harmony) attended Heterodoxy club meetings in Greenwich Village where the seeds of her anarchy were sowed because of course she did. Feminism, it seems, lives downtown.

The bulk of the story however takes place in midtown, just beyond those titular lions, where some of the most precious literary artifacts are kept in climate-controlled rooms; that is until they're purloined in both past and present, their secrets stowed away as if magicians did the crime. Davis manages to take something as bewilderingly benign as book theft and make it rather fascinating, with dialogue as pretty as the Beaux-Arts facade of the library itself. The race to catch the thieves is engaging and the twists and turns are satisfying in their elegance.

But in the end, I found myself wishing for more - I wanted more of those pieces of the story that better fit New York as it is and has always been, rather than New York as it has always been imagined to be. I don't need a story like this to end neatly tied in a bow and leaving the reader contented - I want to be left on fire, burning for change that has still not quite come... out of patience, but full of fortitude. 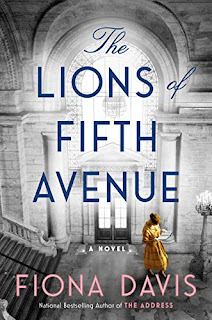