Review: Bringing Up Girls in Bohemia, by Michal Viewegh 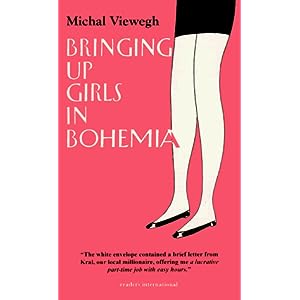 This was my first dip in the pond of Czech literature. Again, just one of those books that I picked up at the library. My whole literary life (for some reason) I've been drawn to authors who appear earlier in the alphabetic registry. Austen, Barrie, Bronte, Byatt, Dickens, Dumas, Fitzgerald, Jacques, Kerouac. In recent years, I've dabbled in the McEwans and McCarthys, Pearsons and Vonneguts. So to now have a Viewegh in the bunch is not necessarily new, but it's fresh. I only wish the translation was better.

It's got some great humor, parody, parody of parody, pastiche. On one hand, when you begin the novel, it feels like Viewegh desires a reader with incredible literary prowess. He quotes everyone on everything and uses it as irony, criticism, cliche and fact. If you want to "get it" you should probably know who these people are. That's what I thought. On the other hand, having now finished the novel, and being able see the whole picture, perhaps he's using his quotes to prove who is master holding all of the strings, and who (the reader) is at the end of the strings. The book is like a literary diabolical dynamo that just pulses quotations, generating and regenerating the responses of every reader.

Published in 1994, the book seems like a perfect way for me to incorporate my nonfiction reading on post-1989 Germany and Eastern Europe into fiction. It offers a fairly familiar plot of boy meets girl, but crossing economical, taste, and generational barriers. Viewegh manages to see the world through his narrators eyes which are inevitably wearing the sunglassed filters of the 20-year-old suicider, Beata. We see what the professor sees, but we feel what the 20-year-old dumpee feels. She's a disaster. But the quotes hold her in place, just as Viewegh wants them to.

"The heartbeats of a lover dead" (p. 124) The novel is a like a musical composition notebook. Each quote is the bass line of the next bar. One of my favorite quotes from the book amused me because it was me....and I know that sounds weird, but to be able to identify oneself in an obscure Czech novel is worth some points in my book: "Chvatalova-Sukova... rushed out to the school garden with the glass jar and a U.S. Army retrenching tool. As always, she moved her limbs in time with an inaudible composition playing somewhere beneath the dome of her skull." I think that's the nugget. I think that's what the book is. The quotes - the beat, the pages - the skull. Get it?
Email Post
Labels: books fiction funke Review vieweigh