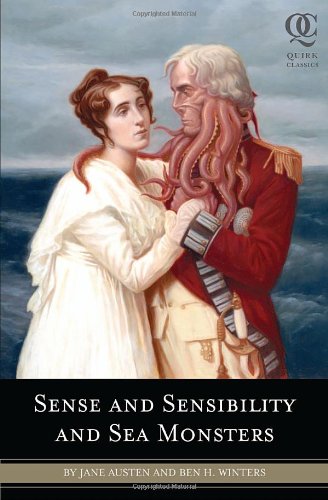 Part of my enjoying this book's predecessor Pride and Prejudice and Zombies lay in the fact that much of it was plausible given the original material. By this I mean that not much of the work was altered to make way for Zombies. Perhaps the largest indiscretion was handing the Bennett patriarch the task of having his girls trained in China. Obviously, Austen's Bennett family would not have had the means. But in a zombie-ridden world, one does what one must, I suppose. Most of the novel's other issues stem from that root. In Sense and Sensibility and Sea Monsters, the issue is somewhat bigger, and much more overt.

Similar to Zombies, Sea Monsters involves a sort of plague that has hit the world many years before the novel takes place. In the former, it was a plague of mankind; in the latter it is more of a plague on mankind. If you've ever read the source material or seen a film version, it will probably have occurred to you by now that - uh - there's no water involved. Well, okay, if you've seen the Ang Lee version of the film, there are two tremendous rain storms - in the first, Marianne is carried back to Barton Cottage by Willoughby. In the second, Marianne is carried back to Cleveland, the Palmers' estate, by Colonel Brandon. The former happens in the novel, the latter does not. It's installed as a comparison for the movie-goer. Perhaps to win them over to Brandon's side or something. Anyway. No water. So in order to effect this terrific plague on mankind and bring them to the water, the story must change a bit.

For one thing, Devonshire is a county 69 miles in length; it is not an archipelago. London is not an underwater glass-domed city. Colonel Brandon does not have octopus appendages on his face (or anywhere else for that matter. Thanks, Ben Winters. That particular comment at the end of the book was completely unnecessary. Oh and speaking of Ben Winters, his website is utterly nonsensical and very hard to follow. Someone should fix that for him and then tell him to stop adding unnecessary shit to the book when we've already stretched our imaginations quite far. Thanks. www.benhwinters.com )

For the most part, the characters (somewhat alarmingly) tend to ignore the maritime threats. When the swordfish are knocking on the glass dome no one seems to do anything until the last moment. Which brings me to my other point. London does not get destroyed/drowned. The only mayhem in the source material consists of the fuses in Mrs. Jennings' head which seem to drive every action and inaction, every motive and feeling, every conception and every opinion. Speaking of mayhem, I hate to ruin the end of the book for anyone who hasn't read it but chances are you won't get to the end --- I almost didn't.

So... SPOILER ALERT. Barton Cottage is on an island called Pestilent Isle. It's not an island. It's a leviathan. And it would be completely unnecessary, except that Mr. Winters felt the need to both explain Mr. Palmer's character, and give Margaret something to do. UNNECESSARY. In the case of Mr. Palmer, we don't care. Hugh Laurie gives an excellent reading of the role in Ang Lee's film and it makes perfect sense with Imelda Staunton as his wife. If you just go on imagining that Charlotte Palmer neé Jennings is Imelda Staunton, Mr. Palmer needs no explanation. As to Margaret, there's no point in giving her the job of proving that children should be heeded. Margaret is of little to no interest and in enlisting her in such a way that she somehow becomes this manic creature that portends the apocalypse of leviathan's waking, etc.... it's all just so boring. At that point, no one cares. Elinor has got Edward and Marianne already has her reasons to love Brandon. The fight against the sea monsters is not over, there's no need to add a bigger sea monster.

And if sea monsters are such an issue, why doesn't everyone move inland? They never explain why everyone is so conveniently lined up on the coast to be slaughtered and eaten. Sure, it's convenient to the plot, but that shows a lack of creativity, I think.

Oh, and it looks like I'm going to need to replace all of my Signet Classics. I love the smell of an old, worn book as much as the next bibliophile. But My Signet Classics (Persuasion, Northanger Abbey, Sense & Sensibility and Mansfield Park) all smell disgusting. It must be the glue because they smell like vomit. None of my other books smell like that so I know it's not my shelving issues. Just these books. Gross.

Next up, Mr. Darcy, Vampyre by Amanda Grange (blame Rory for that one). I'm a little concerned going into it, but I'll expand on that when/if I finish it.
Email Post
Labels: austen books fiction Review