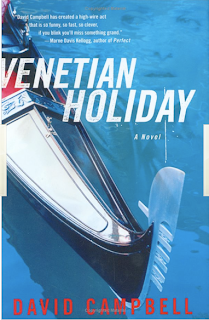 I usually keep my "thriller" reading to a minimum. The closest I get to it most of the time is my fantasy reading: series like the Kingdom Keepers, Harry Potter and Star Wars. Back when Dan Brown became popular I changed my tune for a very long night of reading and read The DaVinci Code in about 10 hours. I then spent the next two months sneaking in snippets of Angels & Demons between reading for school and working on shows.

Years later, I recognize them for what they are -- well written and certainly page-turners, but really just shells compared to what I'm used to. They're written to sell and be read quickly so that the public gets it out of the way and craves more. They're not written to be classics. At some point last year I had nothing to read at work and I wandered into the lending library and found a hardcover copy of The Pelican Brief. Yet another one that was enjoyable but little more than a shell of the depth I'm used to. To me, novels such as these feel like a puppet show with puppets made of marble and curtains made of history papers. Lasting, expensive, well-researched, but with no real life to them. David Campbell's Venetian Holiday is no different.

It's your basic art heist shindig. Woman with a past is the art thief. Gets betrayed. She messes up. Gets involved with a police inspector by accident. Messes up again. Blows up a building. Comes to terms with herself. Gets saved by the same person who betrayed her. Leaves the country with $1.5 Million. Oh yeah and breaks some statues in a Venetian church. Whoops.

This novel kind of tried to be something else, too, though. And I'm not really sure if the author meant for the added zombie and voodoo business to be amusing--that much is unclear, but it does provide an ample amount of comic relief from the fact that Mr. Campbell likes to repeat things. A lot. Bumbling monks, an abbot subjected to a damp zombie curse that has him somnambulating all over San Sebastian, and a trail of salt in his wake. Those were perhaps my favorite parts. I think the somewhat dead Abbot had more character than many of the novel's other players.

The main character, Kate, is analyzed enough that I feel like she was whole, but her counter the Inspector (Limoni, but you can call me Lemons) is somewhat one-sided. We don't go much further than establishing that he has a nascent pot-belly and he likes old American films (and he seems to attract very very strange women...) The closest thing to a real villain (or at least the only one who seems to know what their motive is)--Robie, a man sent to exert vengeance on Kate for a previous heist--is British and that's about it. I think I spent more time imagining his accent than picturing his character.

And then the "other" villains, whose names are even escaping me now as I struggle to tear the tattered history papers from my brain, kind of wander in and play rogue the whole time. The reader feels like they're the one aspect that no one in the novel has control over, and it feels like the author doesn't retain that control either. The girl is just a spitfire that I can put away. The old guy, though, is a little more disturbing. I remember now, he's referred to as "P.B."....I remember because late in the novel there's a typo and it refers to him as "B.P." and my reaction was "the gas station??" He's....creepy. I would be very surprised if he wasn't modelled after the actor Ian Abercrombie. Kind of Batman's Alfred-gone-bad. He's briefly intriguing, but dies too soon after becoming such that he's almost a waste.

This book wasn't a disappointment because of course I had no expectations. Another one that Rory bought me, more as a gag gift than anything else. Ah, well.

Next up, Peter and the Sword of Mercy. Love.
Email Post
Labels: books fiction Review