Skip to main content
Labels
Posted by Lauren May 05, 2010

Review: Free for All: Joe Papp, The Public, and the Greatest Theater Story Ever Told, by Kenneth Turan (and Joseph Papp), OR In Memory of Lawrence Sacharow

I have a bad habit of writing a little too much. In high school and college, and in the real world when you’re writing for something, you’re given a limit, i.e. your paper must be between 18 and 23 pages long, double spaced, 1” margins, 12pt font and include both a works cited and a works consulted, an outline and a title page, each page after page one must contain the page number next to your last name, make sure you use MLA citation. I know why that is -- for one thing, they don't want you exhausting yourself when you have other work to do, and for another, and more importantly, they want you to focus on your subject and tighten the paper so that it is succinct and to the point, but still good. I mostly fail at this.

At that moment in time (early Fall 2002) I wasn’t sure what I wanted to do, but I was certain that theatre was where it was at. When I applied to college, I applied to a lot of generalized theatre programs. I thought that I was going to go into dramaturgy, but I didn’t have a lot of experience with it. I had stage managed one main stage production the previous year (and poorly), so I wasn’t even sure that was what I wanted to do. I knew I was not going into acting, and I knew I didn’t want to direct. I toyed with the idea of props or lighting, but once I had a blowout fight with the lighting designer I’d worked with for three years that very fall, I kind of let all of that go. And I hadn’t yet directed my student production, but once I did, I didn’t really know what I was doing.

But I had directors. They had given me Joseph Papp and Peter Brook, two of the most complicated and formidable theatrical persons ever. But, as with anything, I threw myself into it. Overachiever that I was, I was determined to learn everything about them. (That paper was titled "Deadly Theatre: The Exuberant Impresario vs. The Invisible Man - The Opposing Artistic Visions of Joseph Papp and Peter Brook" ...I think I must have been going for shock value or something, because that title blows.) I associated more with Joe Papp and, as a result, delved a little more into his work than Brook’s but my project was pretty well balanced. By the final draft it was just barely within the limit for number of pages. Actually, in trying to squeeze the last few sentences in, I accidentally cut a sentence from the end of one page and, as a result, my final draft had a page that did not continue properly from the previous one. Go me. But prior to that, I had an insane number of cited works and even more consulted works. I wish I’d kept the list. I had something like 90 sources, a list that you rarely see outside of a full blown bibliography, or perhaps encyclopedia.

There are memories – facts, dates, places, images – from that project that have remained with me, even though they didn’t make it into the paper. Most of them are from Papp. That could be due to my re-using the paper in my freshman year of college. I don’t remember what exactly that project was, but I essentially rewrote and condensed the Papp half of the paper just one year later. (That paper was titled "Joseph Papp: Peanuts, Rock Music & Free Shakespeare" ... a duller title has never been seen.) Fortunately, I still had my notes and my research cards from the initial project, so that worked out. 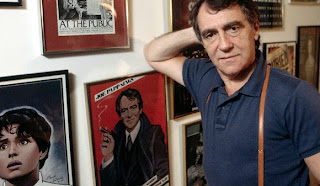 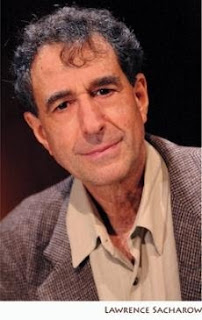 Papp has just stuck in my head. It also didn’t help that once I got to college my first class and my first professor was Acting with Larry Sacharow. A long time ago, Larry said, he had worked with and done odd jobs for Joe Papp. He bore an odd resemblance to Papp, as well. Really not helping is the fact that Larry continues to kind of haunt me. We lost Larry in 2006. Leukemia. He was really sick for a long time, but he worked very hard not to show it. The last production he directed at Fordham was Tony Kushner’s Slavs! (Thinking about the longstanding problems of virtue and happiness); I was his stage manager.

I had never worked with anyone like Larry before. Anyone who knew him will tell you that even when he wasn’t in the room, his aura continued to pervade the air of the production. He was so brilliant and his sprituality allowed him to be so undeniably in-tune with the material as if he were himself giving birth to it. And he made every single person involved feel invaluable -- even when I was in freshman acting with Larry (and I am a godawful actor) he knew what I was there for and he knew how to draw the best things out of me. Larry gave the entire process a musicality that I’ve been striving to match in everything I’ve done since then. He's stuck with me in this way.

And I see him everywhere – perhaps not as often as I used to, in the first year after he died. But I still see him. Constantly. It's terrible to know that someone who mentored you so ardently is no longer there to do so, and yet you can see them wherever you go...and they ignore you because...it's not really them.

Perhaps that’s why I decided I wanted this book. Perhaps it didn't really have much to do with Joe Papp, after all. Maybe it was all about Larry. The dust jacket has a picture of Papp that is so reminiscent of this bemused, knowing and determined look that Larry used to get. The resemblance isn’t uncanny, they’re not twins or anything. But their look and the way they stood, emboldened by the bright passion in their eyes – this is where the similarities are.