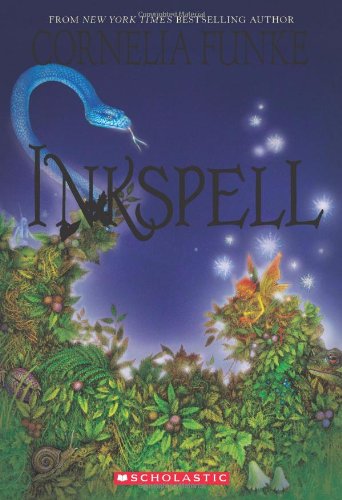 " 'Isn't it odd how much fatter a book gets when you've read it several times?' Mo had said when, on Meggie's last birthday, they were looking at all her dear old books again. 'A if something were left between the pages every time you read it. Feelings, thoughts, sounds, smells...and then, when you look at the book again many years later, you find yourself there, too, a slightly younger self, slightly different, as if the book had preserved you like a pressed flower...both strange and familiar.'"    - Inkspell, Chapter 5


And, indeed, I left my heart in Inkspell. So wrapped up in this book, was I, that I stopped comparing it mentally with your Peter Pans and your Neverending Stories the way I did the last one. Even though, in retrospect, there's a certain hint of Hans Christian Anderson's "The Little Mermaid," but I didn't realize that one of the last 3 or 4 chapters where Elinor takes her signed copy of Anderson's fairy tales out of its glass case. And I weeped. Not then, but before then, when the ultimate sacrifice is made and I realized what it meant...then I wept (standing against the door of the subway car, halfway into the Bronx, because god forbid a girl should get a seat every now and then).

This book was very different from its predecessor because so much of the world was yet to be discovered. In Inkheart, the action took place in the world we all know. The character who had stepped into it had done so unwillingly and, so, felt alien. But here, in Inkspell, the characters who should remain at home go abroad willingly (some more than others) and those with whom we associate best are now alien in this new country.

Funke has a gift of imagination that I envy. I love the way her story unravels. But in gifting us this brand new world, she has made home feel strange. I felt like Elinor needn't be involved anymore. The flashes back to home were distracting more than anything. I also felt as if the plot proceeded with the knowledge that a third book was coming. Does that make sense? I wanted there to be more about Violante and I wanted the real Cosimo to reappear, having been lost somewhere in our own world. I wanted the explanation for the Bluejay's "existence" to be that Balbulus or the Prince of Sighs' minstrel was a silvertongue, bringing things into being. And I found Orpheus to be a glob of scum hacked onto the beautiful pages. I see that he's going to be potentially instrumental in Inkdeath. I get that. But I wish we hadn't had to meet him before all of this.

As for he who gave up his life - I don't want them to bring him back! In this, his death is heroic and loving and beautiful. But the other characters want him back too much. I have a feeling we'll be seeing him again, but I don't think I'm going to like it. I'm going to take some time to digest for a while before picking up Inkdeath. I think I need some time away from the ferocious beauty of the Inkworld.
Email Post
Labels: books fiction funke Review