The Children's Hour, a play by Lillian Hellman

As a student in a performing arts magnet program in high school, my education was better than most people from Florida can claim for themselves. It wasn't perfect, but the structure of the academic program for the magnet was pretty excellent.

As juniors, our blocked-together Acting and English classes gave us the ability to start focusing on larger projects (which, I thought, was excellent preparation for college). The junior-year project was playwright-based. Everyone in our class either picked or was assigned (I think assigned, but I can't remember for sure) a playwright and then we had a multi-phase project involving a written paper (draft, then final paper), a presentation (I think? I could be mixing up some of this with the senior project which was the same concept, but revolved around other theatrical professions), and scenes that we each had to direct from plays by our playwright. The details are all a bit hazy, all except those I committed to memory - the details of playwright Lillian Hellman's life and works.

At that tender age of 16 I was an excellent reader, an excellent student and prided myself on this, but my understanding of Hellman and of her characters has grown over the years as my understanding of other literature and of psychology has grown. At 16 I was inspired by Hellman, but there were simple things that kept me from really appreciating her. I believe that's all gone, now, and her work continues to inspire and impress me with a sense of urgency that I think is more relevant today even than it has ever been. 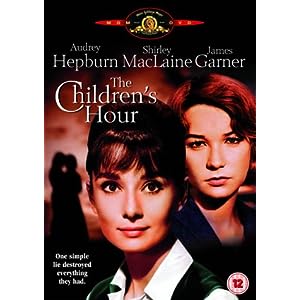 At 26, Hellman's play The Children's Hour (maybe you've seen the 1961 film?) was produced for the first time. She was afraid that audiences might riot, or that the police might shut the show down. This was almost 30 years after New York police had interrupted a performance of Shaw's Mrs. Warren's Profession and arrested the cast and crew. That was merely for the frank discussion of prostitution. Hellman's fare on display was, at the time, considered much worse.

The innocent-sounding title (which comes from a poem by Henry Wadsworth Longfellow -- I've included the poem at the bottom of this post) belies the content: a problematic child takes out her anger on those who seek to help her - she tells a lie...a very big lie... and manages to convince a town that the two teachers who run her boarding school (who have been the best of friends for about 10 years) have in fact been living a lie, have been hiding their true sensibilities from the world, have been engaged in sapphic relations as the children slept down the hall.

Today, the concept is not so shocking, but the taboo placed on lesbianism, and homophobia remain. Conservative (and not just ultra-conservative) parents are still frightened of gay men and women influencing their children in schools, on television, and in books. The fairly recent spotlight on bullying is especially relevant considering the way the play progresses, and the righteous hatred that it portrays. Not only that, but in interviews Hellman made a point of saying that she didn't see characters as evil, but simply as their character...Mary Tilford (the fibbing child in question) may not have been evil in Hellman's eyes, but today we would consider her on route to being a sociopath.

And this is also very relevant--the way we treat children and their personalities is all different -- much different -- than it was in 1934. With the revolutionary diagnoses of attention deficit disorder and autism and asperger syndrome and early diagnoses of depression and manic depression and dyslexia and other learning disabilities...the world is so different now that Mary Tilford and the character of her grandmother are suddenly seen in an altogether different light. And in that change, society's own fears, biases, prejudices and hatreds are reflected. This play holds a mirror to today's society in a way that Hellman may have hoped for, but could not have possibly forseen.

Back at the end of September, I began to think of this play again - I hadn't read it probably in 8 years, but its relevance to the times struck me and I began to wonder why people were reviving Hellman's The Little Foxes when this play is not only more relevant but, I happen to think, a better play. A few weeks later, the announcement came that Keira Knightley and Elizabeth Moss would be dusting off its pages in 2011 in the West End. It was a moment of palpable lucidity. I could almost feel Lillian, that old grump, smirking a smile and raising a glass.

"The Children's Hour" a poem by Henry Wadsworth Longfellow
Between the dark and the daylight,
When the night is beginning to lower,
Comes a pause in the day's occupations,
That is known as the Children's Hour.

I hear in the chamber above me
The patter of little feet,
The sound of a door that is opened,
And voices soft and sweet.

From my study I see in the lamplight,
Descending the broad hall stair,
Grave Alice, and laughing Allegra,
And Edith with golden hair.

A whisper, and then a silence:
Yet I know by their merry eyes
They are plotting and planning together
To take me by surprise.

A sudden rush from the stairway,
A sudden raid from the hall!
By three doors left unguarded
They enter my castle wall!

They climb up into my turret
O'er the arms and back of my chair;
If I try to escape, they surround me;
They seem to be everywhere.

They almost devour me with kisses,
Their arms about me entwine,
Till I think of the Bishop of Bingen
In his Mouse-Tower on the Rhine!

Do you think, o blue-eyed banditti,
Because you have scaled the wall,
Such an old mustache as I am
Is not a match for you all!

I have you fast in my fortress,
And will not let you depart,
But put you down into the dungeon
In the round-tower of my heart.

And there will I keep you forever,
Yes, forever and a day,
Till the walls shall crumble to ruin,
And moulder in dust away!
Email Post
Labels: books children disease hellman henry homosexuality lesbianism lillian longfellow play playwright poem Review theatre wadsworth