This month's Monday Mailbox is hosted by Metroreader.

So I gave in last week and walked into the book store at Grand Central Station when I was book-hungry. You know how they say you're not supposed to go grocery shopping on an empty stomach (presumably because you'll buy all of their frozen pizzas and gelato. what?) The problem with books is I'm usually book-hungry. Which means that if I see something I want, I have to have it. Even if I'm in the bookstore where everything is absurdly expensive.

I really want to see the movie, but I also really wanted to read the book first (and it's been recommended that I do so), so I...had to buy it. I mean Hello? And look at that cover! It's cool! 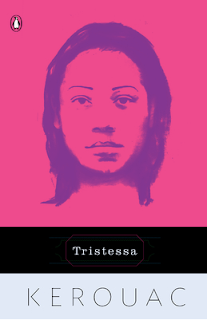 I have so many books I have to read that I already own. Like...stuff coming out this month, stuff coming out next month, stuff that came out last year, stuff that I should have reviewed a while ago...and so I was feeling kind of guilty looking for new books...I almost walked away from the shelf with all the Kerouac on it. But then I saw the bright pink on the spine...and just for a second I thought - huh...something shelved incorrectly. I mean...I don't own every Kerouac novel, but I kind of know them all by sight. So I did a double-take. Sure enough, it was not shelved incorrectly, it's actually Kerouac's 96-page short novel Tristessa that, in the last five years of actively reading Kerouac, I have never seen on a shelf in Borders or B&N or any other book store. Sure, I could have ordered it online, but it's not the same. Now it was staring at me...and I couldn't say no to it. Thanks, by the way, to Penguin art director Paul Buckley for the bright pink.