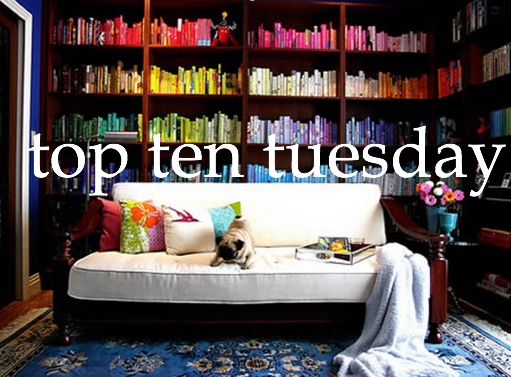 I'm cheating, with 10 new ones I'm excited about, and one anniversary release that I want to buy right now:

1. Shirley, a novel by Susan Scarf Merrell
A literary thriller about the novelist Shirley Jackson, due from Blue Rider/Penguin in June 2014

2. Invisible Love by Eric-Emmanuel Schmitt
From the author of The Most Beautiful Book in the World (which I adored), due out from Europa Editions in July 2014

3. The Lullaby of Polish Girls by Dagmara Dominczyk
This one doesn't reeeeally count because the hardcover was released in June, but the paperback comes out in February, and I want it!

4. Creativity, inc.: Overcoming the Unseen Forces that Stand in the Way of True Inspiration by Ed Catmull
For the Pixar lover, which I am... Due out in April.

5. Careless People: Murder, Mayhem, and the Invention of the Great Gatsby by Sarah Churchwell
Released in the UK in 2013, this examination of Fitzgerald & co is due out from The Penguin Press in January.

6. Five Came Back: A Story of Hollywood and the Second World War by Mark Harris
Because I'm a nerd. Due out in February.

7.  The Knowledge: How to Rebuild Our World from Scratch by Lewis Dartnell
...and a geek. Due out in April. This will be like reading The New York Times' Guide to Essential Knowledge, but shorter and more practical.

8. The History of the Hudson River Valley: From Wilderness to the Civil War by Vernon Benjamin
What? I need a new New York-ish book! Due out in April from Overlook.

9. Alena, a novel by Rachel Pastan
A modern take on Rebecca (which, you know, for its time was a modern take on Jane Eyre...so it goes). Due out from Riverhead Hardcover in January. This really should have been at the top of the list.

10. The Thoughts and Happenings of Wilfred Price Purveyor of Superior Funerals by Wendy Jones
Europa Editions. Quirky Title. You know I want it. Published in the UK in 2012, due out in the US in March 2014.

11. BONUS: 75th Anniversary Edition of John Steinbeck's The Grapes of Wrath, due out from Viking in April.