Dearest Friend: A Life of Abigail Adams, by Lynne Withey

When my grandmother passed a few years ago, I inherited some of her books (as the big reader in the family, almost by default). Among them was this one - a book that my mother had given her to read with the note you'll find at the bottom of this post.

I honestly don't know why I put up with having so many biographies in my possession. I dislike them immensely. They rarely illustrate a full life, especially when it's the life of someone who lived so long ago; we are subject to what was left behind almost incidentally as opposed to recorded, on top of which the writer - who means to interpret and illustrate that life for the reader - often leaves off the least-appetizing bits and inflates the subject's importance.

I don't deny Abigail Adams her influence. She was assuredly one of the most influential women in early American history, and she definitely suffered for it. But in Dearest Friend Lynn Withey really makes it feel as if Abigail was the only influential woman of the time, which is incorrect. And while Withey does not shy away from Abigail's personal faults, she does gloss them over by focusing so strongly on her loneliness, as if that were an excuse.

And from this book, you cannot tell that Abigail and John had any real feeling for one another. The author describes letters between the two of them and often fills space by saying that John did not write often, but still insists that the feelings were strong. In 1981, when this book was first published, this might have been acceptable. In 2016, it doesn't pass muster. I would rather have just read their letters. Instead, it was just a lot of Abigail Adams feeling sorry for herself and trying to control everyone else. 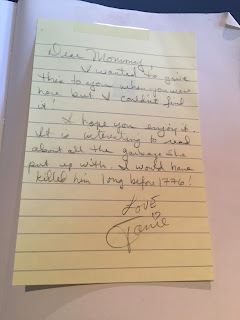 She decides to add rooms to her house, but we don't get an explanation of why. She agrees with her husband's politics (Federalist) until suddenly neither of them do, and then she starts agreeing with the Republicans - but so little is said about what was happening at the time and what could have influenced that change in her vision other than a mention of John Quincy explaining something that we never get the benefit of understanding; it reads more like an outline than a true-to-life story. It's an illustration that is neither complete nor appealing and, as a reader, it is a bit of an affront to my intelligence.

One note: in the epilogue, Withey mentions that although Abigail did not live to see it (spoiler alert?)
she was the "first and only woman ever to be both wife and mother of American Presidents." In 2001, 20 years after this book was published and 200 years since John Adams vacated the Presidency, Barbara Bush became the second. Though I very much doubt that Mrs. Bush ever had to make as many sacrifices, or was ever called on to advise, as much as Abigail was. I also very much doubt that Barbara would ever be caught hanging her laundry in the east room of the White House.
Email Post
Labels: abigail adams american biography historical touchstone withey