For those of you who don't know, my family suffered an unexpected loss last week. My grandmother, my only remaining grandparent, passed away suddenly at the age of 71. We'd all like to think that our parents and grandparents will go on forever, that they'll always be present in our lives. Having already lost my other grandparents prior to this, I know quite well how unreasonable that notion is. But I had begun to think that my grandma would be with us for a while more. It's been a trying week, and it's only going to get worse in the next two weeks while I try to juggle work and family. Thank you for your patience while I try to figure this all out. I finished two books last week and haven't been able to find the motivation to post either review or to start my next book. *sigh*

I got a bunch of new books this week, the following two were purchased via Amazon with the gift card my sister gave me for my birthday. By the way, for anyone who loves all things Disney or likes looking at wedding stuff, or who might be looking to plan a wedding, my sister's blog is pretty cool.

The Haunting of Hill House,
by Shirley Jackson

One of the best ghost stories of the twentieth century, Shirley Jackson's novel was adapted for film twice, both with the title truncated as "The Haunting." The original is pretty intense, the remake is...well it's pretty silly. It scared the crap out of me when I was 14, but looking back it's pretty wretched. I've never read the book, but I'm pretty excited.

The Woman in Black,
by Susan Hill 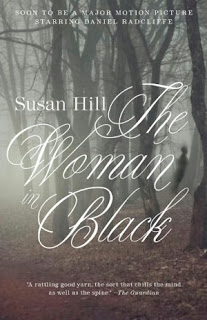 I'm pretty excited. The movie was pretty scary and, from what I understand, the play (which has been running in the West End since 1989) is also pretty darn scary. I think, to be safe, I'll be reading this one in the daytime. Yeah.

The following were collected from my apartment building's lobby, where someone had left a bunch of crap for the taking. Among that crap:

I still haven't seen the film that they made of this. I saw The DaVinci Code twice, so I guess that counts for something? I remember liking this novel more than the other one. I may have to re-read...if I ever get through my TBR pile.

I don't know what happened to the copy I had in high school, and that makes me sad. I haven't read this in eons.

8th ed, Volume C (The Restoration and the Eighteenth Century)

Last week's giveaway was for a copy of Brian Cronin's WHY DOES BATMAN CARRY SHARK REPELLENT? which was recently published by Plume. Thank you to all who participated!
This week's winner was: