I received one ARC:
The Bay of Foxes, by Sheila Kohler

From the press release:
In 1978, Dawit, a young, beautiful, and educated Ethiopian refugee, roams the streets of Paris. By chance, he spots the famous French author M., who at sixty is at the height of her fame. Seduced by Dawit's grace and his moving story, M. invites him to live with her. He makes himself indispensable, or so he thinks. When M. brings him to her Sardinian villa, beside the Bay of Foxes, Dawit finds love and temptation—and perfects the art of deception.

The Literary Gothamite in association with Penguin Books is giving away a copy of Sheila Kohler's The Bay of Foxes which comes out this week! The giveaway is open to U.S. Residents. Must enter by 11:59PM on Sunday July 1st. Each entry is good for one chance to win, but you can get a second entry by tweeting about the giveaway and linking to this page.
Enter here to win:

THE BAY OF FOXES GIVEAWAY

I also got a few books from my late grandmother's apartment this week: I don't really understand the pseudonymous lifestyle, but whatever. 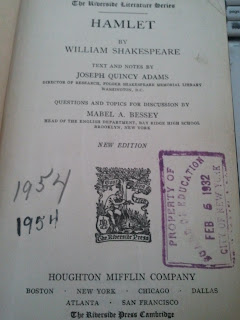 This is a 1931 edition from Houghton Mifflin Company's Riverside Literature Series. It was purchased by the Board of Education of the City of New York and stamped as such Feb. 5, 1932 (in purple!) and then stamped as property of Eastern District Evening High School in February 1938 (in blue, and in black). Someone, possibly my grandmother (who would have been 14 at the time) wrote 1954 on the title page. But my favorite part is probably inside the back cover where Eastern District Evening H.S. stamped a check-out list (instead of a card) which was then filled in by four students in separate years, each for their English 802-202 class. There's an "Anna LaGuardia" of Powers Street, a "Moccia-Avmand" of Grand Street, a "Ioving (or Loving, it's hard to tell, and Loving is funnier) Angelo" of Kent Avenue, and a "Rhoda Becher" of Scholes Street. So interesting. A weird little book published by J.J. Ives & Co., Inc. in 1948. Someone's selling theirs on Etsy for $6.40 if anyone's interested. I'm keeping mine. I did borrow their image (above) though.
Email Post
Labels: bachman books king kipling kohler mailbox monday penguin shakespeare stevenson