I have this teeny weeny soft spot in my heart for mash-up fiction. Vampires, zombies, werewolves, sea monsters...okay, not so much sea monsters. Although if someone were to mash up Jane Austen and Jaws, I'd probably be there. But because this soft spot is so small, there's not much room for challenging what I like.

If you write a book with any one of these aforementioned beings in the title, I kind of expect it to heavily feature that, and that alone. No one wants to read a book called Gatsby: Werewolf Hunter (I made that up) and have it be partially about zombies. It just doesn't fit. Universes should not cross unless explicitly stated. 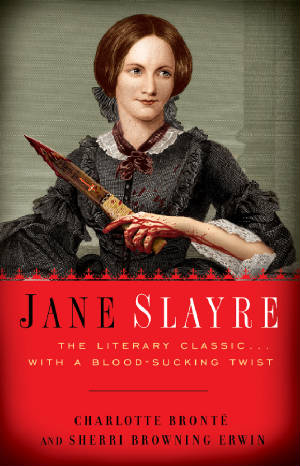 So here's where it gets tricky: Jane Slayre. Now...I think "slayer...or slayre" and generally think vampires. Unless it's Buffy. Also, the bloodied heroine on the cover (an edited image of Charlotte Brontë) is holding a stake. And on the cover, right below the title, it says "the literary classic with a blood-sucking twist." Vampires, right?

There are! There are vampires! Aunt Reed and her progeny are all children of the night. The book starts off right. Until it veers into the very wrong. If you've never read the source material, it's a pretty big book and it's pretty dense. This means two things: 1) there's not a whole lot of room to play. If you're going to retain most of the source material AND add supernatural elements, you've gotta integrate it very well and keep any additions slim, and 2) you have to make it move; no one wants to read a 400-page mash up of Jane Eyre with dead spaces (haha). Unfortunately, co-author Sherri Browning Erwin took the latter fact to mean that she had to pack it as full as possible with supernatural beings.

So along with vampires, you've got zombies and werewolves. Let me say that again: vampires and zombies and werewolves (oh my). This makes the poor book just fall apart. If she'd stuck with one lore to kind of tie the whole thing together (one ring to rule them all, if you will) it could have worked. But you've got Jane training herself to kill vampires (with the aid of her slayer/Slayre blood of course!), a school teacher training her to kill zombies (which becomes necessary because, along with Brocklehurst - Bokorhurst, here - being a religious zealot/ asshole, he's also apparently a witch doctor who makes zombies), and then some nonsense about her slayer/Slayre uncle also happening to know shit about werewolves.

It's just...it's a lot. It's a whole lot. And we've got enough going on. I mean...Jane Eyre is already a gothic novel. There is already a sort-of-ghost, and a crazy wife in the attic who burns shit down. Not to mention all the horrible human beings who already play a part in the original. And it's so Emo, it doesn't need any help. Yet here we are. Trying to make things more interesting. It doesn't need it! All this additional stuff does is make Jane more of a bad-ass (which doesn't fit, because she remains emotionally immature) and make Rochester more of a wimp (which he's not!).

This is not me being elitist. I mean, I can be, but this is not that. Mash-up fiction is supposed to be fun. This is not fun. This isn't as bad as Amanda Grange's Mr. Darcy, Vampyr, but it's still not fun. Good mash-up should still retain the potent qualities of the original. For example, in Pride and Prejudice and Zombies, Elizabeth is pretty bad-ass because of her zombie-killing training in China. But Elizabeth was already pretty bad-ass and put Darcy in his place more than once. It works! This doesn't. This is just messy in all kinds of ways. No more, please.
Email Post
Labels: buffy charlotte brontë jane austen jane eyre jaws mash-up fiction sea monsters supernatural vampires werewolves zombies