In 2011, it would take me about an hour and a half to get home from work every day. That Spring I received confirmation from Little, Brown & Co. that they were sending me an advance copy of Bossypants for review. I was thrilled, but I was also a little apprehensive. We had just recently lost our super, so packages would often be left with random neighbors who may or may not ever give those packages up.

I finally got home on the day the book was set to arrive, and there was a UPS notice on the lobby door - package for me, left with neighbor in 2A. I don't know my neighbor in 2A, but I went over and knocked on her door. She answered, but would not open the door the whole way. The conversation went as follows:

Thus ended my hopes of reading this book in the year 2011. And now 30 Rock isn't even a show anymore. I blame the neighbor in 2A.

I don't even like biographical books - biographies, autobiographies (blegh!), memoirs - they're terrible. Most books styled in this way are not just self-indulgent, but self-serving to the point of being masturbatory. Conversely, I think that's why I enjoy The Moth podcast - it's like little pieces of personal stories, tailored for an audience reaction - and that is precisely what you get in Bossypants

by Tina Fey, which is a powerfully human collection of anecdotes about the author's life before, and in the midst of, show-biz. 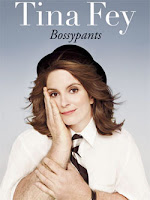 As someone who relates to Liz Lemon on approximately a million levels, I was gratified, relieved and immensely satisfied to confirm that Ms. Fey had not been reaching terribly far into the unknown to create Lemon. She may not be an exact likeness, but the author's self-deprecatory (to the point of turning it into a super power) style gives voice to their similarities. Her wit is forceful, but not forced. Her humor is organic to the point of the occasional wonderful failure. Her voice is all her own and still part of the New York fabric.

It recently came to my attention that (alarmingly) not everyone watched "30 Rock" during its time not-in-syndication. Many people did locally, sure, but that was an easy majority of the viewership. Learning this, it suddenly registered for me why only about 50% of my acquaintance understood the power of "real life is for March!" or why I laugh every time I hear the name Wesley Snipes, or the concept of "Polyblasian" or, more importantly, "Reaganing." And while people in other parts of the country might know Tina Fey from Mean Girls, or her days on "SNL," from Weekend Update, or her turns as Sarah Palin, the mostly not-watched "30 Rock" is the most her (and, by projection, the most me).

So when she turned and wrote it all down, and it sounded kind of like Liz Lemon, I was thrilled - not just because it felt like reading your best friend's personal essay in middle school, but because everyone can go and read the book without committing to seven years of "that weird show about terrible people in New York." Sure, the organization of the piece as a memoir feels a bit jumbled - I appreciate a list as much as the next gal obsessed with BuzzFeed, but sometimes you just want to get to the stories - and while I love writing back to internet trolls more than most people (see: my personal twitter @lalalalaurs), I felt that slapping a handful of responses in the middle of the book was unnecessary pulled focus. But these were things Liz would do, too - so, naturally, all is forgiven and understood. All in all, this is a wonderfully successful memoir of a person who seems to be just as flawed as the rest of us nerds.

Now, if you don't have the time to commit to 7 seasons of 30 Rock, and you can't pick up a book (I mean, it took me five years, I get it) but you do want to watch a show about terrible people in New York, I recommend Tina Fey's most recent television(ish) venture - "Unbreakable Kimmy Schmidt" on Netflix (co-created by Robert Carlock, also of "30 Rock"), or Julie Klausner's "Difficult People" (which is hands-down the most accurate portrayal of my roommate and I that shall ever grace your television or computer screen) on Hulu.

P.S. I saw Jason Sudeikis on the street yesterday and got all swoony. I may be a jaded New Yorker, but I'm not stupid. That is a beautiful man. Here is a gif for you: