This pandemic has brought its fair share of surprises, not the least of me having time to once again pick up a damn book. I won't tax you with tales of the woes that led to this, only with the results: Having finally read a book I purchased in 2013 thanks to a Stephen King review in the New York Times - Joyce Carol Oates' The Accursed.
In all honesty, until this morning I could not remember why I had purchased this hefty and confusing novel while it was still in its infancy, and therefore an expensive hardcover. It wasn't until I started checking in with the web to see how other readers had handled this sprawling para-naturalistic story that I ran across King's review, and the Tomer Hanuka illustration at the top, that I remembered quite vividly my initial interest and desire to read what promised to be a strange pastoral gothic anti-romance.

In fact I can tell you for certain that I probably hit BUY right after reading this line:

I only wish that I could tell you that the book lived up to even that; unfortunately it proves to be more American Gothic than Gothic.
There are definitely shades of Ragtime - the characters of the two novels are contemporaries, yet do not cross paths (save for one mention in passing of Emma Goldman); both have a cast of historical figures corralled into a specific city block of time and space and are forced through a conspiratorial web to interact both with each other, and with original characters; and one gets a sense that Oates, like Doctorow, might be interested in highlighting the causal but deliberate racism that is almost as prevalent in 2020 as it was one hundred and twenty years ago, but she doesn't go nearly as far with it.
Unlike Ragtime, however, it's not the realities of society's systemic flaws that'll kill you, it's a vengeful god. Or demon. Or vampire? Or avenging angel. Or what have you. And that's my biggest problem with the novel - the what have you.
We're presented with a narrator who is purportedly gleaning information from stacks of diaries and records, and yet we get scenes that cannot have been illuminated by said diaries in any way, shape, or form. An example is a scene in which the narrator's own father is confronted by a demon dressed up as Sherlock Holmes (presumably a manifestation of the character's paranoia and determination), after which the character (spoiler alert for many a character in the novel) dies.
We're presented with a depiction of then-Princeton University-President President Woodrow Wilson's character that is too tepid to be interesting, and yet too scathing to be ignored; yet in the end, he proves so irrelevant to the story that you wonder why on earth he was included at all, except perhaps to give the town of Princeton in 1905 some weight on this side of reality. 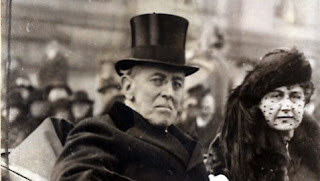 The goings on of the university were the least interesting part of the entire novel and did not help characterize the main themes or plot of the novel except to say "Woodrow Wilson was at such a place when such a thing happened to happen to some other person." The book all-but opens with Wilson being begged by his cousin (who, it is revealed to him subsequently, has mixed parentage) to publicly denounce the lynching of two Black siblings that took place two towns over. Wilson, unsurprisingly, does nothing, the effect of which is also practically nothing. His presence is nothing less than frustrating, and the author's casual throwing-in of a hate crime is maddening.
There are two passages that I saw as noteworthy in this novel, and neither had to do with Woodrow Wilson, despite his unrelenting presence. The first was Upton Sinclair finally meeting his Marxist hero Jack London and being irreconcilably disappointed in the odious man. The other is such a classic trope and manages to be the best thing that Oates writes in the entire novel - a simple game played by a child and a demon, with life on the line. If the book were a painting, these would be the only bits in color. The latter is the only passage where you can believe that the stakes are real, and where you care about the outcome. I could do without nearly everything that comes before, and just about everything that comes after.
Coincidentally, both are scenes that occur outside of the locus of our attention, the latter in an otherwold, and the former in New York City. And perhaps there's something to be said for that. I don't think Oates set out to say that Princeton, New Jersey was the worst place in the world, but I do think she did an awfully good job making the case for it. 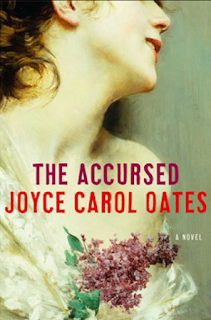 The Accursed by Joyce Carol Oates was published in 2013 by Ecco, an imprint of Harper Collins
Email Post
Labels: new jersey is a hellmouth pass it on oates vampires