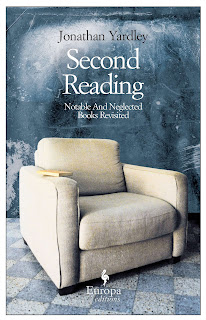 Due out in July 2011 from Europa Editions, it's a "collection of reviews and reevaluations" written by book critic Jonathan Yardley (a Pulitzer Prize-winner), covering everything from Native Son to Tom Jones to Cannery Row to Rebecca. According to my proof, the book has sixty pieces in its 360 pages, and then there are another thirty-seven being made available on the website. This isn't just a book, it's an education. Can't wait.

Care of New York Review Books, this is the first edition of Stacton's book in paperback. It's due out on Tuesday (6/7/11) and I managed to get my hands on a review copy at the last minute, so now I've put off the other two books I had started (Scarlet, by Stephen Lawhead; I'll Mature When I'm Dead, by Dave Barry) and am trying to push through this one. I don't have a day off this weekend, so I've got to do all of my reading on the way to and from work, and what little I can while at work. It's a mere 272 pages so on a good day off, I could finish it in a few hours. But with work and its distractions, not to mention my incessant need to fall asleep on the train on the way to work, it's a challenge. How about that cover, though, huh? I can already hear my mother asking to borrow this one...
Email Post
Labels: books civil war europa editions mailbox monday nyrb stacton yardley