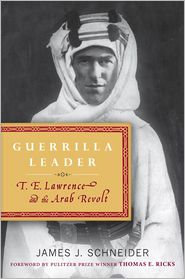 Author James J. Schneider makes one point very clear before his reader even begins his book about the man most people know as "Lawrence of Arabia": while he's done ample research on his subject, he has "dispensed with the normal scholarly apparatus of lengthy footnotes, disputations, tables, and the like for the sake of readability." He goes on to say in essence that he wants to tell the story, not bog it down with excess baggage. The result is a history without annotation, an entirely partial view of the Arab war that ran parallel to World War I, and a study in hero worship to the nth degree.

For anyone who's never seen the 1962 film based on these events (and I haven't) T. E. Lawrence was sort of like John Dunbar (if you haven't seen "Lawrence of Arabia" I have to assume that you have seen "Dances with Wolves") in that he immersed himself into a foreign world and made their cause his own. The author doesn't make this comparison, I do. Schneider relies heavily on Lawrence's own writings (journals, his Seven Pillars of Wisdom, etc.) for both characterization and narrative. He acknowledges in the preface that Lawrence's writing can be "overwrought, obscure, and self-serving" and then goes on to use it as factual, reliable research anyway. And while I can appreciate the attempt to make this history (one that most people probably know very little about as history classes tend to focus more on the European participation in the World Wars than on their African and Asian Allies--for the record, the Arab Revolt was supported by Britain and France in an effort to combat the Turkish, who were allied with Germany) more "readable"it also makes it one-sided, biased and somewhat exhausting.

There's one chapter, fairly early on, wherein Lawrence is laid up with dysentery or some other illness. He takes this time to ponder the war and develops this amazing theory to apply to guerrilla warfare. The effect of reading this passage is the understanding that Lawrence is somehow brave and full of so much character and understanding of this foreign land and we must worship him. And unfortunately that's the tone of the whole book. At a time when, with Arab Spring and everything that is now happening in that corner of the world, we could really benefit from understanding the history and the implications that come with challenging that history, Schneider fails to really step up and give the reader anything more than a loose battle timeline wrapped in Lawrence's "self-serving" narrative. In my opinion, this book is unnecessary. If you want to read Lawrence's writings, read his writings. And if you want a history of the Arab revolt, find a history book. This is not it.
Email Post
Labels: book james lawrence Review schneider