Monday mailbox is hosted this month by At Home with Books.


After we finished opening gifts this year, I made a mad dash to fit all of my new things into five priority mail flat rate boxes. I celebrate Christmas with my Family in Florida, but I live in New York...so this is pretty much always a requirement. This means that I kind of get Christmas several times over, over the next two weeks, as packages arrive with all of my books and other presents. With the weird holiday schedule this weekend, I've only received one box so far, but it had a bunch of books in it - mostly ones I hadn't put in last week's MM - yay Christmas!!


Remember How I Love You:
Letters from an Extraordinary Marriage,
by Jerry Orbach and Elaine Orbach,
with Ken Bloom, and with a foreword by Sam Waterston I had asked for Jerry Orbach's biography for Christmas - which is kind of hilarious because I pretty much detest biographies and autobiographies, but I will always make an exception for Jerry Orbach. My mom, when she was buying that one for me, came across two other books that alibris suggested. This was one of them. I haven't decided, yet, whether I'll read this or the biography first...

The Bridge to Never Land,
by Dave Barry and Ridley Pearson 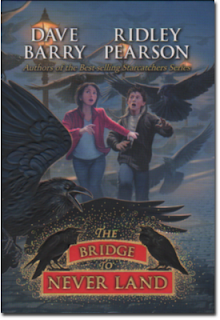 I had heard of this book, but had kind of assumed (not seeing an image of it) that it was one of the Never Land Books that Barry & Pearson wrote to accompany the Peter and the Starcatchers series. But actually this is a sequel to the original series. It still involves Never Land and Peter and even some Starcatcher business, but it's modern-day...and I've just finished it, and it's fantastic. Review to follow shortly.

The Berenstain Bears Series, by Stan and Jan Berenstain:

The Berenstain Bears and the Trouble With Friends The Berenstain Bears and the Truth

The Berenstain Bears Go to School The Berenstain Bears in the Dark The Berenstain Bears Learn about Strangers

The Berenstain Bears: No Girls Allowed

I had these books when I was a kid. I'm not sure whatever happened to ours. Maybe we sold them in a yard sale. Maybe we gave them to the school library. But my sister and I can remember them pretty vividly. For Christmas, my mom put 12 in a gift bag and told Rory and I that we should share. So we divvied them up, taking certain ones because we remembered them best. I can remember seeing myself and my friend...whose name can't remember...in the Trouble with Friends book. I can distinctly remember my grandmother (my father's mother, who passed away twenty years ago) pointing to one of the bears on the cover of ...Learn About Strangers and saying that one's me...it looks like me...look, it's grandma. I'm so excited to add these to my collection of children's books, books that I want more than anything to pass on to the next generation.
Email Post
Labels: barry berenstain christmas mailbox monday orbach pearson