You know the drill: second star to the right, and straight on til [Tuesday] morning...

Top Ten Tuesdays are, as always, brought to you by the girls at The Broke and the Bookish. This week's theme is Top Ten Books for People Who Like X Book...in this case, J. M. Barrie's Peter Pan. I apologize in advance, a few of these are series, not just one book so, for those of you who take this kind of thing to heart, there's a lot of reading in your future. 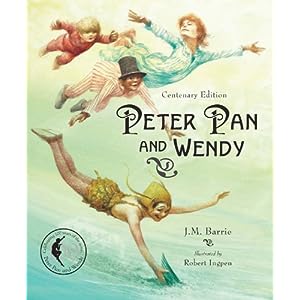 Peter Pan, the story of the boy who won't grow up, is so much more than that when examined on a literary scale: it's about becoming a part of the story, getting sucked in, in a way. Wendy entertains her brothers with the tales of Peter Pan, only to have them swept into that world. A few of these listed are like that. Others capture the high adventure and mischief that Peter captures in his Neverland. And a few of them take place in the heart of Neverland itself.

1. Peter and the Starcatchers Series, by Dave Barry & Ridley Pearson (4 books)
Duh. You can't have a list for Peter Pan without the Peter and the Starcatchers series. Apparently they only sell books 1-3 as a box set, and the fourth one separately. Which is fine, really, because the first three are the better ones. The fourth one was kind of a let down.

2. The Bridge to Neverland, by Dave Barry & Ridley Pearson
A Starcatchers book that's not really in the world of the Starcatchers, but still as worthy.

3. The Neverending Story, by Michael Ende
Talk about getting sucked into the story. That's just what Bastian does. Fans of the film will recognize the first half the novel. The second half is...weird.

4. The Kingdom Keepers, by Ridley Pearson (5 books)
I couldn't resist another Pearson title. I've only read the first two books in the series (III and IV are seriously beckoning me!) and this is a little less Peter Pan and a little more Disney, but the idea is similar--being wrapped up in a world where the characters who, before, only existed in fantasies, are real. Even the dolls on "It's a Small World." Have fun with that one.

5. Tales from Earthsea, by Ursula K. LeGuin
Part of the Earthsea Cycle, but you don't need to read the others to read this one. Mystery and fantasy and adventure and hijinks. And it's gorgeous.

7. The Daydreamer, by Ian McEwan
Part-Kafka, part-Lois Lowry, part-Dr. Seuss. McEwan read these stories to his kids and gauged their reactions in the editing process. Sweet and simple stories about a little boy's fantasy world. AND the boy's name is Peter.

8. The Chronicles of Prydain Series, by Lloyd Alexander (5 books)
Welsh fantasy bildungsroman--The Black Cauldron is part of this series. Since it's about Taran growing up, it's kind of anti-Pan, but the structure and mysticism make it a definite part of this list.

9. The Book of Lost Things, by John Connolly
This book would also belong on a list for people who like the film Labyrinth. The story is somewhat similar, but the execution is stunningly different. The mythology involved is just...god, I love this book. It's a little gruesome for some...I know some people just can't seem to get through that. But if you love fairy tales of any sort, this should be on your list. Another example of a child being sucked into the stories.

10. The Inkheart Trilogy, by Cornelia Funke (3 books - Inkheart, Inkspell, Inkdeath)
Just as Wendy in effect breathes life into Peter and Neverland with his stories, so, too, do the silvertongues of Funke's world. AND there's high adventure. AND there are fairies. AND you should also watch the film. The end.
Email Post
Labels: alexander barrie barry bonoux connoly ende funke leguin mcewan pearson peter pan tuesday ten